Lyrics
At the Trocadero

That part of my story that is relevant to The Drummer Loves Ballads is already told through the album itself. Behind my urge to add a drop of something (hopefully) beautiful into an ocean of the everyday is appreciation. I love the music  in my life and the people who make it, so I made a record to say thank you for both. I figure gratitude is as good a reason to make music as any … 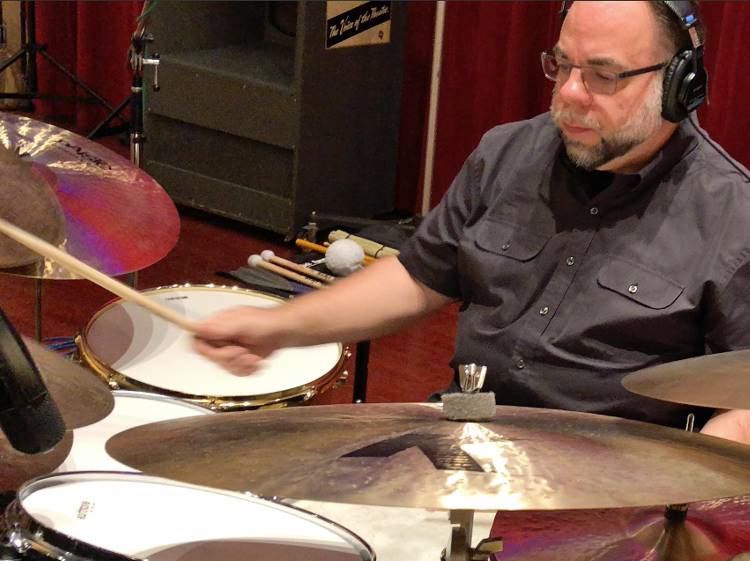 John Armato grew up in nationally recognized school and university programs, including the Winnetonka High School music program led by renowned music educator Dr. Charles T. Menghini, and the rhythm sections of well-known vocal jazz educator Kirby Shaw at the University of Missouri-Kansas City. He played steadily in most of the university ensembles, including Mike Parkinson’s jazz program.

In 1986 John earned a coveted spot with the All-American College Band at Disneyland, a summer-long professional experience for 20 musicians selected from coast-to-coast auditions.

Professionally, John has worked with 50s acts such as The Ink Spots, The Drifters and The Platters as well The Jimmy Dorsey Orchestra and the Guy Lombardo Orchestra.

For 20 years, until his move to New York in 2004, John steadily worked casuals, musical theater, and society events through band leaders such as Steve Miller, Tony DiPardo, Don Warner, and others. John was a member of the Kansas City Chief’s “Pack Band,” Kerry Strayer’s Kansas City Seven, and the Boulevard Big Band, as well as an occasional sideman for jazz and tap dance duo, the McFadden Brothers.

He was a member of trio behind Lisa Henry, a winner of the prestigious Thelonious Monk Institute Vocal Jazz Competition in 1994. That same year he performed with a 40-member cast of musicians, singers and dancers representing the state of Kansas in a tour of St. Petersburg, Russia.

While in New York, John worked with the late tenor saxophonist Bob Kindred, vocalist Anne Phillips, and cornet legend Warren Vaché, among others. John relocated to Sacramento, California, in 2008 where he has worked extensively with local and visiting artists.

All Tracks except “Don’t Worry ’bout Me”

Rod was one of the first “local pros” i met as I began my playing career in Kansas City. From the start I was struck by three things.

First, Rod is the ultimate musical pro. Rod gives every gig, every set, every NOTE, his all. He plays to his maximum level, no matter if he’s in a local country club or center stage at Lincoln Center. He has a remarkable capacity to create energy with his playing and every solo is shaped with intent. Where others spew notes as randomly and as quickly as they can, Rod chooses his musical words carefully and tells a story.

Second, Rod is just flat out a nice guy, with humility inversely related to his vast talents.

Third, dude’s funny. He can make his band mates laugh with a few words or even a look. (I’m tempted to give you an example, but it’s bound to be “you had to be there” stuff. Trust me on this one.) 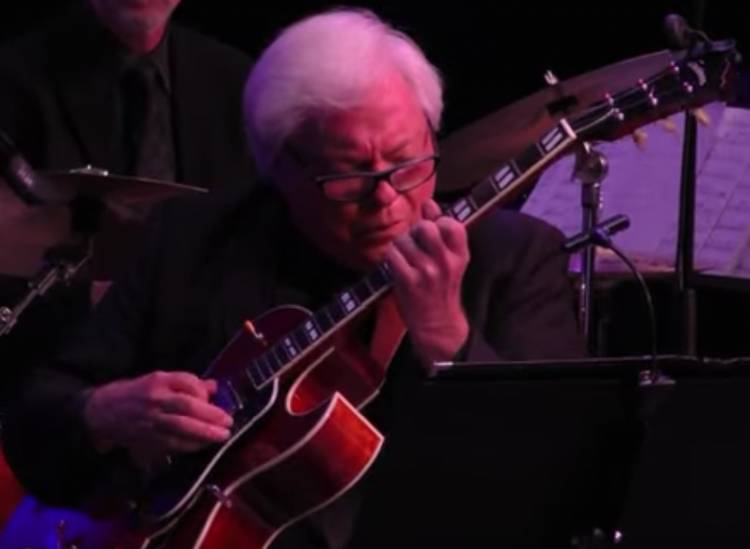 Rod Fleeman is one of Kansas City’s busiest jazz guitarists, with 30 years or touring, recording, and performing with local and A-list artists to his name. He developed a love for jazz while a freshman at Southwest High School in Kansas City, Missouri, then studied jazz guitar under Dr. William Fowler at the University of Utah. He returned to Kansas City after his freshman year. He played jazz six nights a week at various jazz venues, became the staff guitarist at Starlight Theatre and established his bona fides as a freelance musician in just about every genre and in every setting from duos to big bands and orchestras.

With a scholarship offer to attend the University of Miami and a recommendation from Miami alum and another Kansas City son, Pat Metheny, Rod made the move to the university’s acclaimed jazz program. There he played in the top jazz band and gigged around Miami Beach. A move to New York followed and Rod became a part of the jazz fusion group Dry Jack, with whom he toured and recorded extensively.

Since returning to Kansas City in 1981, Rod has toured and recorded with such artists as Marilyn Maye, Karrin Allyson, Jay McShann, Claude Williams and Interstring. You’re as likely to see him a Lincoln Center in New York as you are the Blue Room in Kansas City.

Rod currently serves on the staff at the University of Missouri–Kansas City Conservatory of Music and Dance and the Kansas City Kansas Community College.

Music
At the Trocadero

Thinking of the many years of musical and personal friendship I’ve enjoyed with Wayne, I get flashes of the “Riverside Jazz Band” playing at Costello’s Greenhouse (and me trying to find my Dixieland chops). There’s a rather, shall we say, modest Top 40 band called “Kansas City Class” where changing from black bow ties to red for the the second set was our idea of slick. There’s me writing and designing a promotional brochure for him. There are basement rehearsals at his grandmother’s house, misc. casuals, and leisurely post-gig hangs over a burger at Winstead’s.

Then there is his raw talent. Wayne is one of the finest musicians I’ve ever worked with. His playing on The Drummer Loves Ballads is integral to the sound of this entire project. He was also an invaluable collaborator. How he managed to make such lovely music out of my sheaf of lyrics, which defied traditional form, I’ll never know.

As always, Wayne was a great hang on these sessions. We shared stories, laughs, and meals (alas, not at Winstead’s), and once again traded meandering views on life and our attempts to navigate it. It was a special pleasure to be navigating it together again. 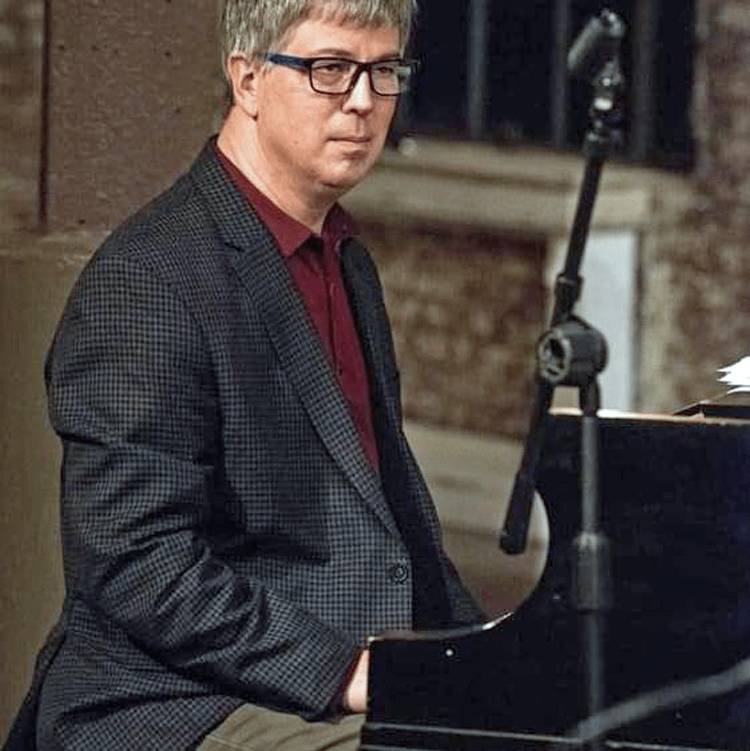 A versatile pianist and keyboardist, Wayne Hawkins performs throughout the country, collaborating with artists of varying styles of music.  As both composer and arranger, Wayne has written for a variety of films, commercials, and recording artists.  His career began in Kansas City, one of the cradles of jazz, where he performed nightly.  Notable collaborations included the Wayne Hawkins Trio, Doug Talley Quartet, Ida Macbeth and Friends, Voyage with Dan Thomas, and the Kansas City Symphony.

After moving to upstate New York in fall 2014, Wayne recorded “Random Acts of Kindness” with Chris Pasin, lead trumpet player for the Buddy Rich band, in 2015.   Released in 2017, “Ghost of Yesterday:  Shades of Lady Day” featured Wayne in a collaboration with jazz vocalist Teri Roiger, bassist John Menegon, and drummer Steve Williams.  In 2018, he recorded the album “North Greenbush Blues” with the Phil Allen Concert Jazz Band.  Wayne’s collaboration with Dan Thomas on the album “Midwest Minor” is soon to be released.  He is currently recording with guitarist Joe Finn.

Wayne’s complete discography includes more than 40 recordings with a wide variety of artists.  As a leader, his recordings include the critically acclaimed Wayne Hawkins Trio and his “Solo” album.

Gerald has long been in the small inner circle of first-call bass players in Kansas City’s jazz community. I always counted myself lucky to find myself on a gig with him — and never more so than when Lisa Henry called me to be part of the rhythm section recording her demo for the 1994 Theloniuos Monk Institute International Jazz Competition (now the Hancock Institute of Jazz). With Gerald on bass and the amazing Dan DeLuca on piano, not to mention Lisa herself, I had to remind myself that the old adage “you always want to play with musicians who are better than you” was a GOOD thing!

That demo session still holds up to repeated listenings, even nearly 30 years later, in no small part because of Gerald’s taste, time, and inventiveness. (And it worked out pretty well for Lisa, too. The Institute launched her into global tours and gigs with the likes of Herbie Hancock as a result.) 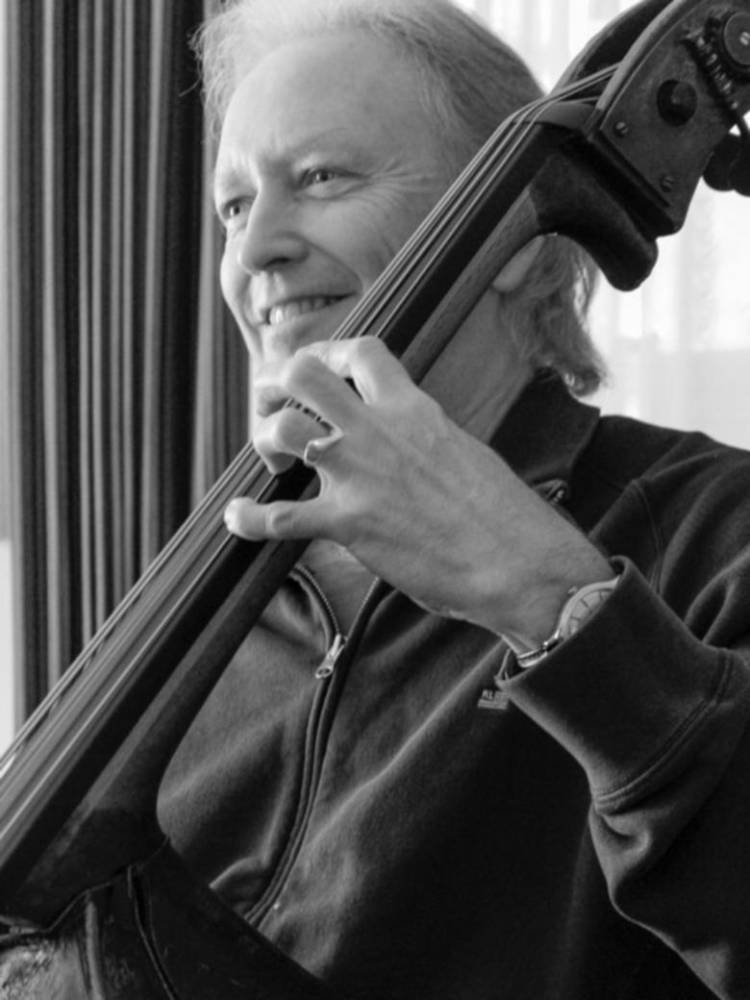 Gerald has performed at the Montreux Jazz Festival, the San Jose Jazz Festival and the World’s Fair in Seville, Spain. He has led groups under his own name as well as the KC Bass Ensemble and Sax and Violins, a double quartet featuring a jazz band and String quartet.

In 1998 Gerald debuted his self-produced CD, “Three Sides,” followed by several additional CDs on the Passit Productions Label. Gerald produced “Never Let Me Go” with the Russ Long Trio and The Westport Art Ensemble, which featured many original compositions and arrangements. In 2006, Gerald released a second CD with Russ Long, “Time To Go.” It was Russ’s last before his death later that year and featured Russ’s original music arranged for a seven-piece group.

Gerald is on the faculty of The University of Missouri-Kansas City as the instructor for Jazz Bass and leader of the UMKC Bass Ensemble under Bobby Watson.