THE DRUMMER WHO LOVES BALLADS

From Christmas toy drums to first lessons, from his first professional gig to a tour of Russia, drums have been John Armato’s constant companion. He has played clubs and concerts from New York City to Napa Valley and was a member of the trio behind Lisa Henry, a winner of the prestigious Thelonious Monk Institute Vocal Jazz Competition.

While the beat and burst of high-energy drums captured his attention early on, it was the swish and sizzle of ballads that captured his heart. It was always about the beauty, not just the bang. (As a kid, after seeing Buddy Rich repeatedly on the “Tonight Show with Johnny Carson,” Armato asked his parents for an album by the drum legend for his birthday, but “one with a whole band playing, not just a bunch of drum solos.”)

Forty years ago, Armato played one of his first jam sessions. That’s where the story of The Drummer Loves Ballads — and the album itself — begins. 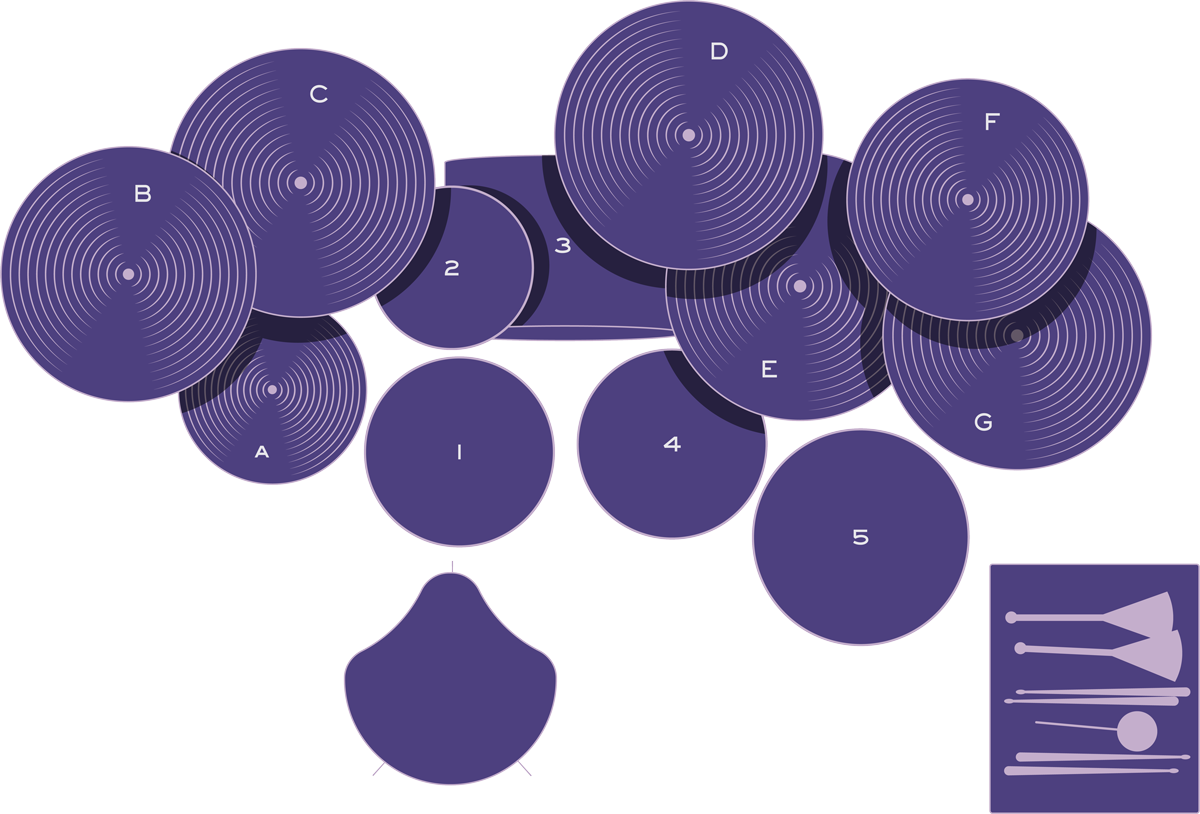 This is the first “real” drum I ever played. It was in the “Eddie Oyer Studio of Music and Dance” as part of the kit I sat down to at my very first drum lesson, May 27, 1972. I took lessons on it for seven years. On a visit back to Kansas City in 2012 I visited Eddie, who had been retired for many years and who I hadn’t seen in ages. At some point in our chat I asked whatever happened to “those old drums,” figuring they were long gone. They weren’t. They were just upstairs. Eddie’s wife, Patty, said they tried to sell the drums when they closed the studio, but without success. “Couldn’t even give them away,” she said. My heart raced and I asked to buy them on the spot. They were thrilled and I was over the moon.

Not only is this drum a prized memento, but it is also an exquisite instrument. It is by far my favorite snare for jazz. In the studio, we used just one bit of tape to tame the overtones. No other dampening was used.

I have these in Satin Walnut Glaze in home studio and used a Gloss Rosewood set in the recording studio. Despite being one of Gretsch’s more affordable models, they just feel good and record quite nicely. The Earthtone heads are not as fussy as old-school calf heads, but still require a little pampering. The 12” in particular needed to be tweaked up to pitch pretty routinely.

I have these in Satin Walnut Glaze in home studio and used a Gloss Rosewood set in the recording studio. Despite being one of Gretsch’s more affordable models, they just feel good and record quite nicely. The kick drum in particular is capable of delivering a big, round (and surprisingly low for an 18”) warm tone in the studio.

I have these in Satin Walnut Glaze in home studio and used a Gloss Rosewood set in the recording studio. Despite being one of Gretsch’s more affordable models, they just feel good and record quite nicely.

I have these in Satin Walnut Glaze in home studio and used a Gloss Rosewood set in the recording studio. Despite being one of Gretsch’s more affordable models, they just feel good and record quite nicely. This 16” will take you about low as you want to go. For reasons of availability, the 16” we used in the studio was actually a DW, but my normal set-up is Gretsch. The Earthone head was impressive on both the Gretsch and the DW. It held a very low tuning (barely a single turn of the tension rod) without wrinkling.

I never played Paiste until shortly before beginning work on this album and I absolutely love the crystalline quality of the Modern Essentials line. These are now my go-to all-purpose hi-hats. For TDLB, I chose them for tunes where I wanted a stronger “chick” and brighter stick sound, such as on the upbeat “Prelude” or bossas. Used on tracks 1, 3, 9, 11, and 14.

These are very thin and light cymbals I found in a used drum shop in Denver. The top and bottom cymbals are roughly equal in weight. I liked the way they sounded, but had trouble getting the edges to meet consistently and I also struggled to set a reliable angle on the bottom. Ken Burman of Midwest Custom Cymbal Repairs just barely shaved the edges to correct the fit and re-drilled the holes to get them to seat properly. I also had Ken add four equally spaced rivets to the bottom cymbal for just a bit of sizzle. When he was done, they played like a dream. I chose them for the especially exposed or delicate tunes on the album, such as “Lonely Woman.” I like to use foot splashes, but I needed cymbals that keep such splashes controlled and airy without disrupting fragile passages.  Used on tracks 2, 5, 6, 8, 10, 12, 13 and 16.

This is one of three riveted cymbals in the TDLB set-up. That may sound like a lot but sustain is the name of the game for a drummer playing ballads and a sizzle cymbal is a great tool to create it. Plus, I guess I just really like them.

I adore this cymbal. Flat rides can disappoint in live settings, but they are a thing of stick-definition beauty when recording. When I move from this cymbal to my main ride (or vice versa), there’s a whole shift in energy and momentum and it really expands the color palette available to me for any given song. For TDLB in particular, this cymbal is the absolute key to the cymbal-based bolero I developed for track 16, “For All We Know.” There’s no way that pattern would have worked as well with the wash you’d get from a regular ride cymbal.

The K-Con line is a favorite of mine. The wash on this cymbal has a breathy quality I love.

This is the first China I’ve ever played that keeps a low profile in the overall soundscape. So many have a tendency to beat you over the head with a clangy quality. I asked my fellow Sacramento drummer, Bryan Kilfoil, to custom install rivets for me several years ago and now I finally have the dark, trashy-but-controlled accent I’ve been looking for. For TDLB it was the exact sound I wanted to ride on for track 11, “Poinciana.” To me it’s the sound of the breeze in the Poinciana trees.

It crashes. It swells. It rides. I love this thing. I especially love the way it gives up the rolling crescendos on track 5, “The Shadows of Paris.” It’s the only official “crash” in the TDLB set-up.

Swish number three. Ken Burman custom installed the rivets on this one. On TDLB I use it mainly as an occasional accent, more as a crash than a ride.

(This link will take you to a new site)

Click to view liner notes, behind the scenes photos & videos for an in depth look into each track.